The Aging Lip - A Breakdown:

Lips are one of the first places that we show our age. There are four things that happen to lips throughout the years. First, lips lose volume and body. You can see this in the lips of elderly ladies – they are often very thin – much thinner than the lips of teenagers.

Thirdly, because you are losing volume in the body of your lips, and because you are losing the columns of tissue near the nose that support the upper lip, you begin to get little horizontal lines around the outside of your lips, which are commonly referred to as “smokers’ lines” although they occur in both people who smoke and people who do not. You can think of these lines very much like you would think of the wrinkles you get on the surface of a balloon as it deflates. You are losing volume both in and around the lips, and since the skin has nothing to “fill it out”, it wrinkles.

Fourth, and finally (are you depressed yet?) you also lose volume in the sides of your chin– particularly in horizontal lines below the outside edge of your lip – leading to “marionette lines”. This loss of support leads to the outside corners of the mouth turning down, giving the lips a “sad clown” or a drooping appearance.

Okay – that is the bad news. The good news is that all of these things can be corrected with dermal fillers – so let’s talk about correction, shall we?

It is easy to correct the loss of lip volume. Filler is placed in the middle of the lip – between what is called the “wet-dry border”, which is just what it sounds like, and the “vermillion border”, which is the line where the red of your lip stops and your normal colored skin begins. This has a really nice effect of “plumping” the lip and generally takes one syringe of filler or less. 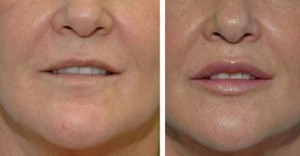 The key to beautiful lips is creating a natural shape and contour. Just “filling up” the lip without providing definition, can leave a person with an overblown “duck-ish” look. Rebuilding the philtral columns is also very easy to do – and gives the upper lip definition. Smokers’ lines can be corrected with filler, as well – using a slightly different technique. Instead of injecting between the wet-dry border and the vermillion border, you inject along the vermillion border itself. This fills in the skin just under the smokers lines and causes them to even out. Finally, injecting filler just below the corners of the mouth can give enough support to the corners of the mouth so that they turn up instead of drooping. This can also be done with about a half of a syringe in the average person.

Remember – when it comes to fillers in the lips, less is more! A lot of people put a large amount of volume into the lip – when you can get a much more natural and attractive look with less volume and more attention to contour. Generally speaking, we will not put more than one syringe of Juvederm into the lip, and will place another half a syringe in the marionette lines to provide support if needed.

Injections may cause some discomfort during and after the injection. Most Fillers have lidocaine (a painkiller) mixed in with the gel which reduces the discomfort soon after it is injected. You may choose to numb the treatment area with topical numbing cream or ice to reduce discomfort – especially around the lips which are very sensitive. You will be a little sore the day you get your injections, but that resolves in 24 hours or so.

How long does treatment usually take?

The injection process takes only about 15 to 30 minutes. If you choose to do topical numbing we recommend allotting an additional 30 to 60 minutes for the numbing medications to take effect.

Once you get filler, do you have to get fillers forever?

You may like how your filler looks, but your face itself cannot physically get addicted to filler. Hyaluronic acid fillers are intentionally made to be temporary (lasting between six months and two years depending on what’s used and where it’s injected) and are gradually dissolved by the body, leaving nothing behind but new, healthy collagen growth. However – as with most things which make us look years younger, most patients do make regular appointments to keep looking their best.

When you get injected with filler, will it be totally obvious?

The only fillers that you notice are those that are overdone or misplaced – trust me when I say that you have seen a lot more people with filler than you think you have! Many of the people you think overdid a filler actually have surgical implants. Getting an ‘overblown’ look with fillers is actually difficult because of the sheer amount of material it takes to get that look.

Most dermal filler made from hyaluronic acid. Hyaluronic acid is a naturally occurring substance in your skin that helps to hydrate and add volume.

What is the right filler for my lips?

There are two considerations when choosing a hyaluronic acid dermal filler. The more “cross-linked” (this is a medical term that is used to describe how tightly the filler sticks together) a filler is, the longer it lasts and the more support it can give your skin. However – the more rigid a filler is, the more it will be visible under the skin.

Softer fillers such as Restylane® and Volbella® are best for the lip – since there is a lot of movement and the filler must act in a very fluid way.

How soon will I see results and what does the downtime look like?

Results are immediate. Patients will typically be slightly red in the injected areas for 24-48 hours.

If you have your lips injected expect swelling. Lips are very delicate tissue, and you will experience marked swelling for 24-48 hours. This is normal, and will go away naturally with time – but we recommend that people getting their lips done do not schedule any major social events for about 72 hours just in case.

Filler can typically be felt under the skin for a couple of weeks after the injections are performed – this goes away on its own and normal after injections.

Are there any potential side effects?

Side effects of Filler injections may include slight bruising, redness or swelling. Most side effects are mild and last only a few days. The most common side effects include temporary injections site reactions such as redness, pain/tenderness, swelling, lumps/bumps, and bruising. As with any injection, there is a very small risk of infection or damage to nearby blood vessels or nerves – but this is exceptionally rare.

What should be done before a Filler treatment?

Avoid taking aspirin or ibuprofen before your appointment – as these are both blood thinners which can increase bleeding or bruising at the injection site.

What should I do immediately after Filler treatments?

Refrain from vigorous exercise until the following day. Other than that you can return to your normal activities. When getting your lips injected we recommend that you avoid spicy foods and alcohol for 24 hours since your lips will be tender and sore.

Receiving regular medical grade skin care and aesthetic treatments is one of the healthiest activities you can do for yourself. At RESTOR Medical Spa, we have made it easy and affordable for you.